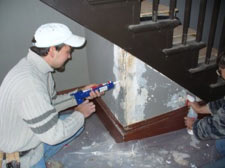 We received a question recently from a customer about to start a renovation that involved plaster repair. He asked: “If a renovator disrupts 6 square feet or less of painted surface per room in several rooms inside one property, does the RRP Rule apply?”

First, some background. The RRP Rule is the Renovation, Repair and Painting Rule. It was issued by the Environmental Protection Agency in 2008 to help protect against the hazards of lead-based paint.

So, to answer your question: No, the rule does not apply in this plaster repair circumstance. The beautiful thing about using Plaster Magic®is that there is no demolition involved — you are adhering the damaged plaster back onto the wall rather than ripping it out and disturbing its pained sandwich.

As long as no prohibited work practices are used and the work does not involve window replacement, you’re all set. The exception to the RRP rule for work that disrupts 6 square feet or less of painted surface applies to each individual room and is inclusive of all work done in the room in any 30-day period.

Here’s another question we received recently: “My firm drills a series of 1/2 inch diameter holes in sheet rock to dry it out where rooms have been flooded. Is drilling these holes a prohibited practice?”

Specifically, HEPA exhaust control is not required when using a power drill to drill holes in sheetrock. When using a power drill with a drill bit to cut through sheetrock, the speed associated with the contact between the bit and the paint is not of the same magnitude as the contact speed generated by the machines identified in the regulation. Therefore, the work described in the question is not a prohibited practice.

One last question: “If I use a hammer to make a hole is a wall that is two feet on each side, does the RRP Rule apply?”

Actually, yes. Although making the hole disrupts less than six square feet of painted surface, using a hammer to make the hole is considered demolition of the surface, so the minor repair and maintenance exception does not apply. However, if you make the hole using a cut-out technique that does not destroy the section of the wall that is removed, it is not demolition, and the minor repair and maintenance exception would apply.

The moral of the story here is that you can avoid the rather strict EPA rules and regulations by repairing plaster walls and ceilings rather than tearing them out. You’ll save time, money, headache and perhaps most importantly, you’re safeguarding your and your family’s health during the plaster repair process.